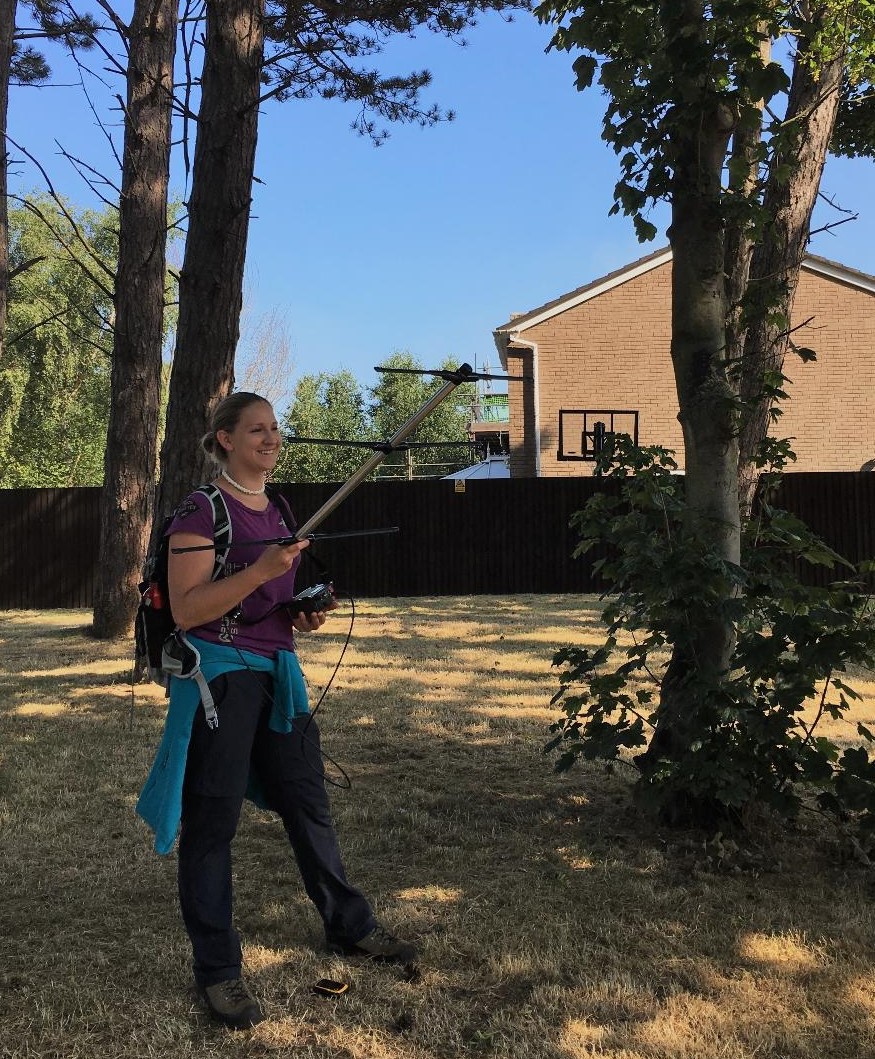 Kathryn Fingland is a part-time doctoral researcher at Nottingham Trent University. Her current research focuses on the urban ecology of red squirrels: specifically how red squirrels utilise the urban environment, as well as how human activities influence their ecology. Through this deeper understanding she aims to develop a tailored urban conservation strategy for this native species.

Can you tell us a bit about what you’ve being doing?

Sure, during my PhD I’ve been working with the Lancashire Wildlife Trust, National Trust and local volunteers in Formby, where we have some of the last remaining populations of red squirrels in England. My research aims to gain a better understanding of how red squirrels interact with the urban environment to see what we can do to support the health of populations.

There are lots of different aspects to researching red squirrels including: habitat surveys, putting radio-collars on to monitor their home ranges, and tracking the mortality of the red squirrels to find out through sample collection and analysis what they may have died of. That way we can find out if it was pox, traffic, predation, or something else.

We’ve even been able to work with the University of Edinburgh to carry out genetic analysis on the isolated red squirrel population in Formby. We’ve also carried out bone strength analysis to give us an insight into the nutrient value of their diet.  Many people give squirrels peanuts, for example, but we’re interested to see whether this is giving them enough calcium in their diet.

I also carried out a questionnaire mail-drop in Formby to see what and how frequently people were feeding the squirrels, how often they were cleaning feeders. Understanding this kind of human behaviour in relation to reds means we can assess if we are doing the right things or not.

Why is this type of scientific research so important to conservation?

Now we tend to use research to see what is happening before implementing conservation actions. I believe that this is the right way and indicates a more effective approach by using science as the basis for our conservation strategies.

What can be done to reduce the chance of a squirrel pox outbreak?

This disease is a significant risk to red populations, which is why we need science to understand the dynamics better. What we are still trying to fully understand is how squirrel pox is spread, because if we know the pathway, we can look at trying to break it somehow.

Science has been key to monitoring squirrel pox outbreaks – along with the local people who spot potential cases. We’ve seen with Coronavirus how early detection of sick individuals really is so critical. Keeping track of outbreaks and being able to see what is happening is only possible through ongoing surveillance, but it is expensive.

So far, research has helped us understand that red squirrels can spread squirrel pox among themselves. This means that you only need a few pox-carrying grey squirrels to run through a territory with a high red population density to  initiate a disease outbreak. So, for example, researching what drives high density populations might help us know how to reduce the risk of squirrel pox outbreaks, because the more concentrated squirrel populations are, the more quickly disease can spread.

Understanding these sorts of things help us create better conservation interventions. Unfortunately, science funding for conservation is limited, despite it being really important.

What role can science play in saving red squirrels?

With scientific research and new technologies, the scope is huge for what can be achieved. New insights help us build a better picture of red squirrel behaviour and context, which means we can create bespoke conservation strategies for different areas and study sites – hopefully enhancing outcomes.

Science and technology can have huge impacts on protecting remaining red populations. From a pox vaccine, to oral contraceptives, and gene drives – there are options being researched that combined can make a massive difference. Each one will reduce the spread of squirrel pox and slow down grey reproduction rates. Because, even without the pox virus, greys would still out compete reds for territory and food.

What are your hopes for science in this area?

A lot of us are waiting for your contraceptive! That’s the big one that everyone [in the science community] is waiting for. Technology wise it would be something like the contraceptive that would make the big difference. It can help to achieve our goals by temporarily reducing the greys capacity to breed, whilst also helping to overcome the public’s feelings towards lethal management.

For me, the contraceptive is the best hope for long-term conservation efforts. It’s not a scary approach, because we’re used to the idea for humans, so why wouldn’t it be good enough for squirrels?  This will play a huge role in reducing the pressure on reds, by getting the grey squirrel population densities down and helping reds disperse to spread over new areas and recolonise territory.

And finally, what do you think is the hardest thing preventing the potential of science to save red squirrels?

So, funding is a huge thing as its very limited across the field of conservation – particularly for red squirrels, because their being endangered is almost uniquely a UK issue. Research takes so much time with so many resources involved, it’s hard to get the funding to be able to carry it out, particularly to support those long-term projects.

Historically, conservation has been seen as something to get on with practically, now it has evolved into an evidence-based approach. So our biggest stumbling block is securing funding for that critical, game-changing research.

For example, with developing a viable squirrel pox vaccine, we know how difficult and expensive this can be – and we don’t have that kind of funding available in the red squirrel conservation world. We would essentially have to do the same as with the Covid-19 vaccine in terms of developing, testing, and then distributing the vaccine, which is an absolutely massive task that requires a lot of resources.

On the flip side, red squirrels are an incredibly adorable and charismatic species – people typically do like supporting their conservation. This is something that I’m really hopeful for as in the last few years interest in conservation and innovative nature-based solutions like rewilding has grown.

Supporting scientific research really is the route to save red squirrels from extinction and as a researcher, I will always support this kind of approach.