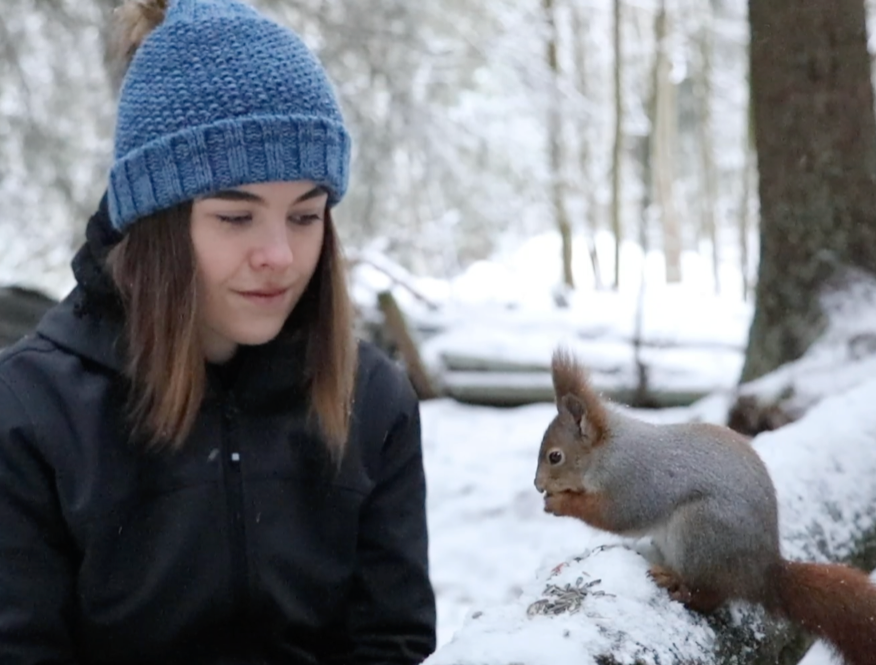 As their ambassador, Dani will be telling the story of the British red squirrel through a series of short 10–15-minute YouTube videos, starting with some filming on location in Cumbria this summer. These unique documentaries will be adapted for Facebook, Instagram, Twitter and TikTok to help appeal to both wider and younger audiences. The first of Dani’s documentary videos will be launched in time for Red Squirrel Awareness Week at the end of September.

Dani Connor, known as Dani Connor Wild on social media, is the only zoologist to date to document the lives of red squirrels from such an intimate vantage point. Her videos, filmed during a four month stay in Sweden last year,  have garnered Dani a strong social media following.. A fifteen second video of a baby squirrel eating sunflower seeds right next to her camera microphone shows not only what a baby red squirrel sounds like when eating, but also how red squirrels can learn to trust humans – and even enjoy interacting with them. This ‘I put my microphone in front of a 7-week-old baby squirrel’ video went viral on social media. It received 16.6 million views on Twitter, achieved 790.9K likes, 207.9K retweets, and 6K comments.

This type of exposure is vital for RSST to help save the UK’s only native squirrel from extinction, as Mark Henderson of RSST explains: “Dani will be an extraordinary asset to red squirrel conservation efforts within the UK, and we are so excited for this new collaboration with her. Increasingly social media is being used to share important messages and causes now, particularly with younger generations, and already Dani has demonstrated her incredible grasp of both conservation and digital media. She will be a wonderful way for us to engage new and larger audiences in the plight of the iconic species in our own country.”

After graduating with a degree in zoology, Dani worked at the Natural History Museum in London before founding a digital startup company called Pocket Pals, where she showcased two animated films for World Wildlife Day and for World Pangolin Day. But it wasn’t until being stranded in Sweden at the height of Covid-19 lockdown, that she was able to make photography her full-time career. Over the past year, Dani has focused on digital content and has gained 120,000 followers across her platforms, engaging people with the natural world through her photography and YouTube videos.

In taking up her role with RSST, Dani said; “I am thrilled to become an ambassador for RSST. Much of my work over the past year has focused on red squirrels – I was living in Sweden and had red squirrels on my doorstep. I fell completely in love with them! Returning to London, I missed the red squirrels and I didn’t realise how difficult it was to see them in the UK. I am extremely excited to collaborate with RSST and showcase the story of the red squirrel in the UK and focus on the amazing conservation efforts to save this charismatic species.”