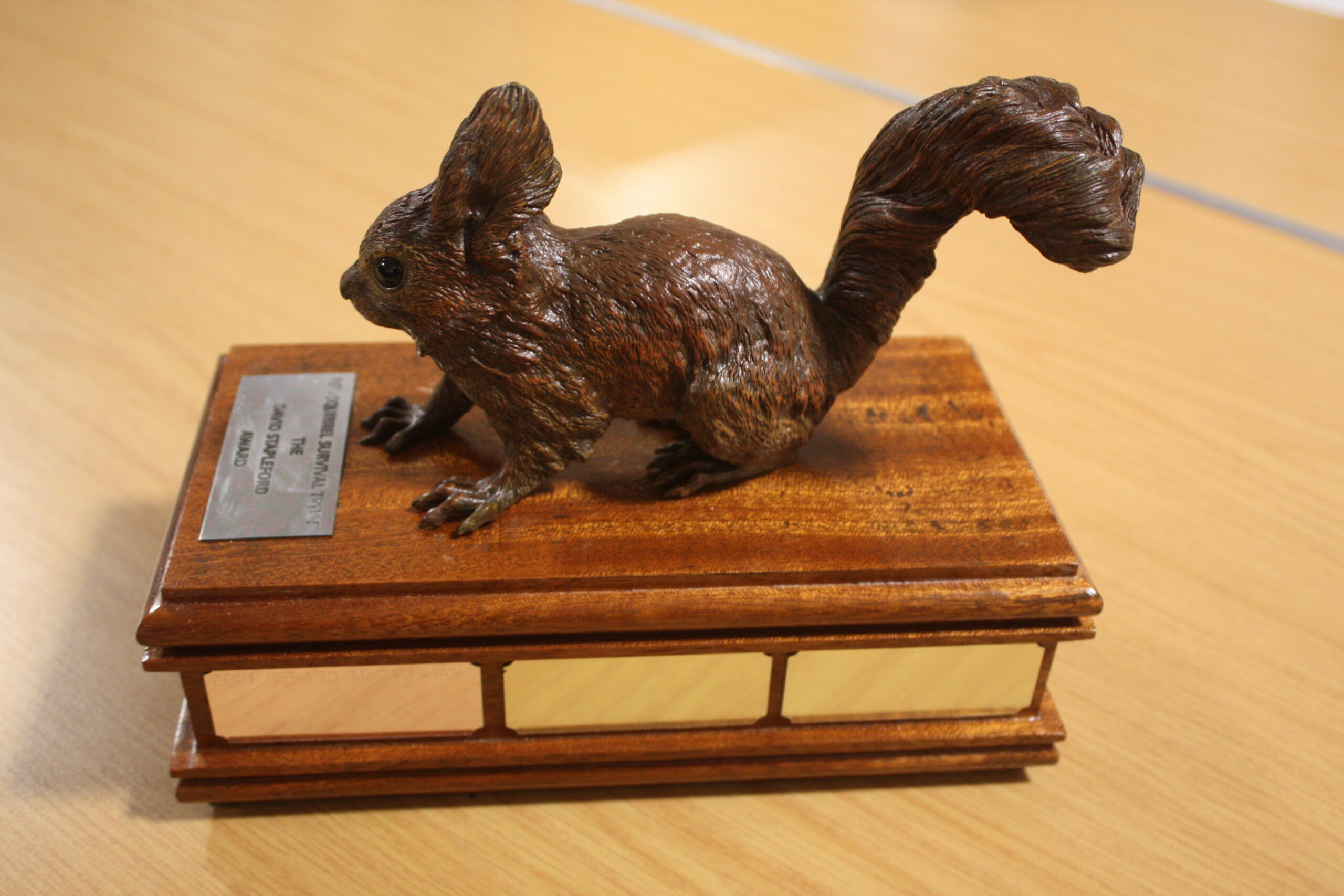 Winner of the David Stapleford Award 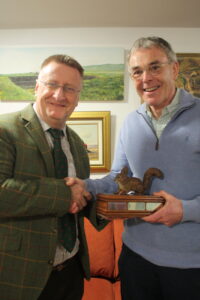 How did you feel when you heard you’d been chosen as RSST Volunteer for 2021?

I was surprised I’d been nominated let alone won. I felt chuffed and embarrassed in equal measures. I think it’s a reflection of what we do as a group, rather than what I do myself.

“I live in Glenshesk, one of the Nine Glens of Antrim, south east of Ballycastle on the north coast of Northern Ireland. I retired almost 6 years ago and retirement gave me the opportunity to become more involved with the Glens Red Squirrel Group.”

How did you get involved in red squirrel conservation?

I’ve always had a keen interest in wildlife, particularly birds of prey and it was a chance conversation with Daniel McAfee of GRSG who told me that I had red squirrels in my neck of the woods. I didn’t believe him, but the loan of a feeder and trail camera soon convinced me otherwise. It was around 2010 that I joined GRSG, becoming a committee member and then a Ranger in 2014 when the GRSG developed the idea of Red Squirrel Rangers”.

Tell us a little about GRSG

“The Glens Red Squirrel Group formed around 2008 and was one of the first volunteer groups for red squirrel conservation in Northern Ireland.  Originally covering some fifty miles of woodland from Ballycastle in the north, down to Larne. It’s grown enormously from those early days providing awareness and education to many age groups. We run guided walks and safari trails, workshops covering trapping, trail camera use, bird box and squirrel feeder building. We also promote, and carry out tree planting and forest and woodland restoration locally, specifically with future red squirrel habitats in mind. Along with other groups, we helped Belfast Zoo get their breeding programme up and running by supplying suitable young wild squirrels, and have been involved in reinforcement translocations of young reds back to the wild off the success of that programme.”

What type of tasks and activities make up being an active member of GRSG?

“We have three official Rangers in the group who are able to undertake day to day/operational activities on behalf of GRSG. For example, we help and advise our many volunteers on matters relating to grey squirrel control, red squirrel feeding, feed suppliers etc. other higher-level issues must go before the committee. On the admin side, we had to create a database from manual records for memberships and develop standardised documentation for memberships/renewals, donations and the like. When we formally became a registered charity, we had to ensure that we complied with all documentary requirements for that status under the NI Charity commission. One of these was a list of assets, this documents what equipment we have and where it all is at any time.

Grant submissions are also a large part of the admin and can take a lot of time to compile. On the awareness side, we have a website that needed simplifying and updating, and an active Facebook page to maintain too. This goes hand in hand with our skills courses, presentations and guided trail walks. We’ve also set up a dedicated telephone answering service, ‘The Red Squirrel Hub’. It provides a contact point for the public to ask questions and report sightings. We get numerous calls along with emails from all over N. Ireland. The enquiries cover, kits falling out of dreys or into ponds, injured reds, what to feed reds with, suspected squirrel pox outbreaks and road kills of both reds and greys.”

GRSG also has a focus on habitat regeneration, tell us a bit about that 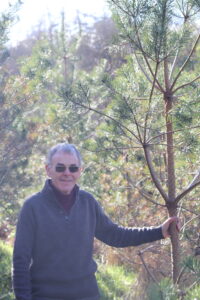 “A society grows great, when old men (and Gerard!) plant trees, the shade of which they know they will never sit in”

When potential and new members join and ask ‘what needs to be done?’ we simplify the answer into two parts. (a) do what’s necessary to help them survive in the short term, and (b) plant and manage now for their long-term future.

We have surveyed much of the territory we cover and whilst some glens have great mixed tree cover, other areas are sadly lacking. In my area of Glenshesk, I noticed that we were losing mature trees through storm damage, and this was having an effect on habitat cover, and the red population. I spoke with numerous land owners, many of whom readily helped in planting. One such neighbour offered a two-acre site. It was of interest to me as it borders two other woodland sites which have healthy populations of reds in them, one of which was planted by my grandfather some 100 years ago. In the winter of 2014, the GRSG volunteers cleared the site, and a contractor planted 1270 trees. 70% Scots pine, with Oak, Alder, Beech, Yew, Hazel, Crab Apple, Willow etc. We’ve also had many trees donated from various sources and we have also received a donation of fruit trees and bushes. The trees have been in for 8 years now and are taller than me and growing well. We meet a few times a year to clear grass and other growth to keep them in top condition. They are already producing fruit and the Dog Rose (hips) are a big favourite of the reds.

Pine Martens have become quite the hot topic recently in N.I. How do you see their involvement in what you and the group do?

We have them in many of the areas where we work, and they are making a slow comeback. I think the reason it’s so slow is the lack of abundance and variety of small mammals and rodents generally. Reds won’t be easy to catch apart from the old and sickly and are as likely to be predated by foxes, domestic cats and birds of prey as they are Pine Martens. Without a plentiful supply of food, Pine Marten numbers won’t be rapidly increasing based on red squirrel presence alone. Sadly, more reds are lost to road traffic in the Glens than any other means.

How has the Pandemic affected you?

For the GRSG as a group, the biggest impact of the Pandemic has been funding. We rely on consistent donations to fund our work and most of this would be generated from our guided trips and hide visits, but obviously the lockdown has had a significant effect on our ability to organise these. Sue, one of our Committee Members, came up with the idea of using car boot sales and this has helped tremendously in what would otherwise be very lean times. The early days of the pandemic meant that grey control was reduced but we’re back on top now and in fact, I haven’t seen a grey for six months or more. We are really looking forward to getting out and about with the general public for our usual walks and talks. Educating and informing, we feel are a very important part of our purpose.

What gives you the greatest pleasure in your volunteer work?

I find the volunteering is a great way of occupying your mind. Whether its outdoors at the feeders and in the woodlands, or trying to find a solution to a tricky administrative problem, I think it’s great for your mental health. Working with my group and seeing the way we pull together to get things done is also really gratifying. But if there was only one reason for doing this, then seeing a red squirrel at a feeder is a fantastic way to confirm that what we’re doing makes a difference. To be part of bringing back some balance to our local nature is why we do what we do.

To find out more about the Glens Red Squirrel Group contact; info@glensredsquirrelgroup.com.

For more information regarding red squirrel conservation and volunteering across the UK contact mark.henderson@rsst.org.uk