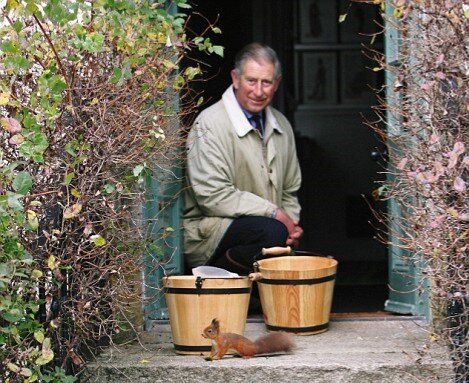 The Red Squirrel Survival Trust has been delighted to receive the support of HRH The Prince of Wales in a letter to our volunteers. A copy of the letter can be seen via this link.

His Royal Highness is a great supporter of red squirrel conservation and the long-standing Patron of the RSST, HRH expressed his encouragement and admiration for the efforts of volunteers fighting for the survival of the red squirrel, and the native British trees that provide their natural habitat.

Determined to build on their record of local successes, volunteers have collectively organised projects across the country to prevent further decline of red squirrel populations. From Cumbria to Cornwall, and from the Scottish Borders to Northern Ireland, this conservation work on the ground is aimed at securing the last remaining strongholds. In recognition of the thousands of volunteers fighting for the survival of the red squirrel, now less than 140,000 across the UK, HRH The Prince of Wales said in his message to the volunteers:

“Without your efforts, we simply could not hope to succeed in the task we have set ourselves. Generations to come would be denied the pleasure we take for granted in the healthy woods that are now threatened as never before, and of which the red squirrel is both the symbol and, by its presence, the benchmark.

“As you will all know so well, these charming and intelligent creatures never fail to delight. I take enormous pleasure in having them around – and in! – the house when I am at home in Scotland. They are such inquisitive and delightful characters; they have even been known to hunt down a few of their favourite nuts left out in an unguarded jacket pocket!”

“I am so very grateful to all of you, as volunteers, for the crucial role you play in this ongoing battle to protect and restore a precious part of our natural heritage. This brings you all my warmest good wishes, together with every possible encouragement for the task ahead.”

Responding to HRH’s welcome words of support, Stephen Trotter, a Trustee of RSST with extensive experience delivering conservation projects across the North of England, said:

“I know all the many volunteers involved in red squirrel conservation across the UK will be delighted, inspired and grateful to read these warm words of thanks and encouragement from His Royal Highness. The RSST is very lucky and proud to have HRH as our Patron, and there is no doubt that his continued support helps direct a spotlight on this important work. It is truly heartening to read of the passion and fondness in which this most iconic species is held.”

The RSST works to protect existing populations of native red squirrels through campaigns to raise awareness, by donating to local projects, and also by raising funds for vital research into practical grey squirrel management. Officially categorised as an endangered species, there is still much work to be done to ensure the long-term future of red squirrels, and to protect their presence in our environment for generations to come.

Stephen Trotter concluded:
“The Red Squirrel Survival Trust is looking forward to working even more closely with all of the amazing volunteers and members of local red squirrel groups around the UK. It is these local red squirrel groups and their volunteers who undertake 80% of the conservation activity which is so critical to the survival of red squirrels on the mainland. Indeed, it is their hard work and commitment that is largely responsible for saving the species from inevitable extinction in those parts of the British Isles where it still survives despite the presence and expansion of grey squirrels.”

Red Squirrel Appreciation Day is a chance to celebrate both our most treasured national wildlife, and those who ensure the protection of their habitat and future. No doubt, the gratitude and words of encouragement of HRH The Prince of Wales will give further momentum to this growing movement of committed conservationists in these challenging times.