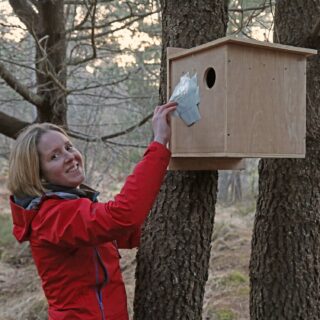 Becky Priestley is currently Wildlife Officer for the rewilding charity Trees For Life in the Scottish Highlands, where she has worked since 2012. Having led the Red Squirrel Reintroduction Project since 2015, Becky has played a profoundly important role in the successful relocation and reintroduction of Red Squirrel populations across the Highlands in the area around Inverness. Becky has an exciting history and extensive experience of environmental restoration, having volunteered on wildlife conservation projects across the world following her the completion of a BSc in Ecology in 2005 and later an MSc in Conservation Biology.

Can you tell us a bit about your role & what goes on at the Dundreggan estate?

Since 2016, we have been running a project to reintroduce Red Squirrels to the northwest Scottish Highlands. Reds were last seen here in the 70s and 80s and are believed to have disappeared largely due to habitat loss. There is now once again an abundance of suitable habitat in the region and, critically, it is free from greys, so offers an ideal refuge for reds. By creating a series of new populations that can expand throughout the region, the project offers the opportunity to significantly increase both the numbers and range of reds in the UK.

In your experience, what do Red Squirrels need to survive & flourish?

For reds to flourish they need to have no threat of competition or disease transmission from grey squirrels, and this is what makes the northwest Highlands the perfect place to reintroduce them. Habitat is obviously important as well and the northwest has a wonderful mix of coniferous and broadleaved forests, with species such as Scots pine, larch, hazel, beech and oak offering the perfect mix of foods to sustain them in the absence of greys.

How many squirrels do you release at a time & where are the reintroduction habitats that you are targeting?

The number of squirrels we release depends on the site’s location and opportunities for connectivity to other released populations, but it is generally between 20 and 30. We only translocate wild squirrels and trap very widely across Inverness-shire and Moray to make sure that we don’t negatively impact existing populations. All squirrels are given a health inspection to check that they are fit for translocation and then are released in specially-built nest boxes which they exit themselves, normally at first light the following morning. 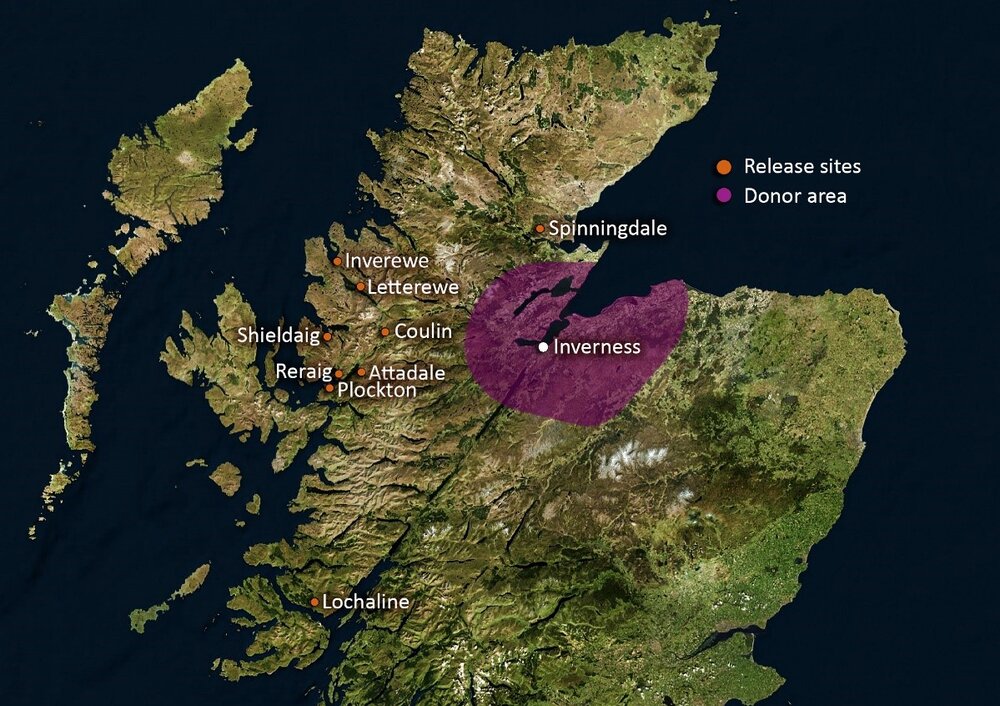 Can you tell us a bit about the successes you’ve had & what trends have been emerging?

We’re delighted that all nine of the translocations we’ve carried out have been a success. We have trapped and released more than 170 squirrels with no losses during translocation, so the process works really well. All of the new populations bred successfully after release and are now thriving and expanding throughout the available habitat.

The most exciting thing to observe is how the populations are now beginning to colonise new woodlands beyond, and sometimes isolated by a significant distance from, the original release sites. As well as the expected colonisation of adjacent woodlands, we now have established populations in at least four further forests and it’s been astonishing to see how far squirrels have travelled to reach these new areas – in one case 16km and over several km of open ground!

In terms of rewilding & reintroducing Reds, what are the biggest challenges?

We are very fortunate in that people have been extremely supportive of the project and are always excited about having Red Squirrels released in their local area. Most people are happy to help in whatever way they can, which certainly makes my job easier! We are also fortunate in that existing populations in the Highlands and in nearby Moray are Squirrel pox free, which makes health screening donor squirrels less complex than it would be in other regions.

The translocations can be logistically challenging as there is a lot of work involved in baiting and trapping from multiple sites at the same time, so volunteer assistance is crucial for the project.

What are your hopes for the future?

Our long-term aim is to restore Red Squirrels to as much of the Highlands as possible. We hope to be able to do this through further targeted releases and then, long-term, through released populations joining up. Many estates across the Highlands are now engaging in large-scale afforestation schemes and this will be hugely beneficial not only for squirrels, but for all wildlife, as more and more habitat becomes available and corridors are created between existing woodlands. It is already extremely satisfying comparing maps of Red Squirrel presence before the project began with the current picture today, and seeing the difference we have made. We look forward to seeing more and more former areas recolonised and the maps continuing to slowly turning red

How can people get involved &/or help Red Squirrels?

One of the fantastic things about this project is that it is not only the squirrels that benefit. It’s been wonderful to see how enthusiastic people are about the project and how keen they are to help. There are lots of ways to get involved – from helping to bait the feeders which catch squirrels, to assisting with the release, and carrying out supplementary feeding of the reintroduced populations for a few months afterwards.

We try to engage with local communities around the release sites as much as possible and run guided walks to train people to help with monitoring. We also run an education programme with local schools and take children out into the forest to search for signs of squirrels.

One thing that is extremely useful in our monitoring is sightings reports: alongside field surveys, these help us to measure spread out from the release sights, so one of the most useful things people can do is to report any squirrels that they see.