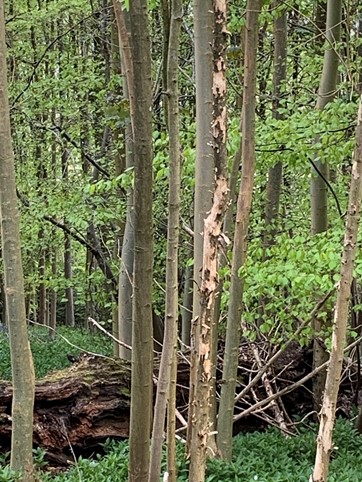 While we work to protect the few remaining native red squirrels in the UK and reverse their catastrophic decline, there is another related concern.  The imported grey squirrel (estimate at well over 2,700,000), not being an evolutionary product of British nature, has in its relentless spread collided with another part of the ecosystem of the British Isles.

We all know that squirrels strip the bark from all but fully-mature trees to gain the nutrients that lie beneath and that this exposes the tree to pathogens that cause disfigurement and ultimately death.  But did you know how serious the wider repercussions are? The size of individual grey squirrels and the density of their colonies together far outstrip the ability of native tree species to cope.

Not only does this cause both a dramatic loss of habitat for the red squirrel and the devastation of woodland, it also results in loss of forestry revenue estimated to be at least £37 million per annum in England and Wales (see the recent report “The cost of grey squirrel damage to woodland in England and Wales” by the Royal Forestry Society with other UK Squirrel Accord (UKSA) signatories).

Forestry businesses, the main providers and guardians of new woodland, have as a direct result stopped planting native broadleaf species because the trees will not grow to be harvestable. Urban trees, which play a role in the management of CO2 and the absorption of particulates, are also targets for bark-stripping damage.

All this will lead inexorably to a dramatic loss of our native woodlands as old trees are not being replaced.  Mature, healthy trees provide a wealth of ecosystem services, such as cleaning air and water, improving soil quality and function, mitigating heavy rainfall and flooding, and reducing and sequestering atmospheric carbon. As trees mature, they provide niches and habitat for a huge range of different species. A mature oak (one of the tree varieties most targeted by grey squirrels) can support over 2,000 different species.

As things stand, the woods planted today cannot develop into the biodiverse ancient woodland of the future.

We need Your help

Along with the UK Squirrel Accord (UKSA), we are appealing to woodland owners and managers as well as the general public for help in identifying and photographing evidence of the intensive bark stripping being done by grey squirrels. The more information that we have to build on the research already published by the Royal Forestry Society, the better able we will be to tackle this increasingly serious issue.

If you can help, please email images or footage, with information you want included (e.g. county, damage severity, media credit, etc.) to info@squirrelaccord.uk or via Wetransfer to send larger files