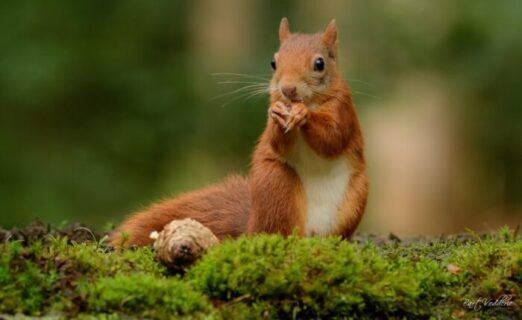 I grew up in south London, where I went to school and eventually to The Royal Veterinary College and qualified as a Vet. My first job was at a practice in Warrington, Cheshire where I’ve stayed ever since. I had my own practice for 17 years before eventually selling up to work part time and then retire. I was in Anglesey on holiday when I first saw squirrel feeders and began to take an interest in red squirrel conservation. This coincided with a ‘call to arms’ by the National Trust at Formby who needed volunteers to help with their red squirrel population. Helping with the feeders was ideal for me as it gave me an opportunity to cover the tasks needed and walk my dog on the beach after. Then came a huge SQPV (squirrel-pox virus) outbreak and we were not able to use the feeders. For a time, we scatter fed on the ground but it was realised that this mightn’t negate the infection risk and actually introduced further risks, so the supplementary feeding stopped altogether. There wasn’t much to do for a while, but I was on the lookout for something interesting.

Rachel Cripps of the Lancashire Wildlife Trust introduced me to Dr Kat Fingland, a lecturer from Nottingham Trent University who was undertaking a PhD based on Red Squirrel adaptation to an urban ecology. Formby was perfect for her as there are reds in and around the town itself as well as the coastal woodland. I joined with Kat to help trap and PIT the reds we captured and Radio tag a number of suitable squirrels. We would then spend the following month tracking them to get a sense of territorial instincts, how far they ranged, how they interact with an urban environment etc. My professional experience was really useful to help trap safely, with a minimum of stress to the animals, how to deploy the tags and get them released back safely as quickly as possible.

The tagging and tracking continued for three or four years and was immensely enjoyable, but Kat’s work is now coming to an end and I’m back looking for something to do. For me, it’s all about being ‘hands on’. Volunteering means different things to different people and I think, particularly as a retiree, we shouldn’t be afraid to be specific about what tasks or activities we find involving and rewarding. 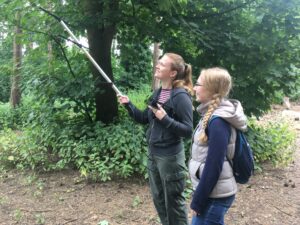 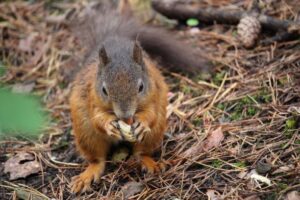 The perfect spot for my favourite food 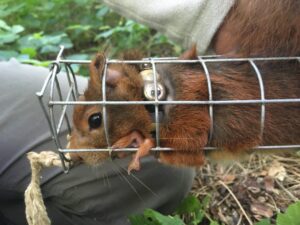 Handling tubes are vital to keep them safe whilst inspecting/tagging

If you wish to help, volunteer, or donate, please contact Emma Dwan at edwan@lancswt.org.uk

A CHANCE TO READ ONE OF THE OTHERS